⬛️⬜️🇪🇺 23 members of the Parliamentary Assembly of the Council of Europe (@coe / Strasbourg) have signed a Written declaration demanding to ‘safeguard the democratic rights of Catalan parliamentarians’. 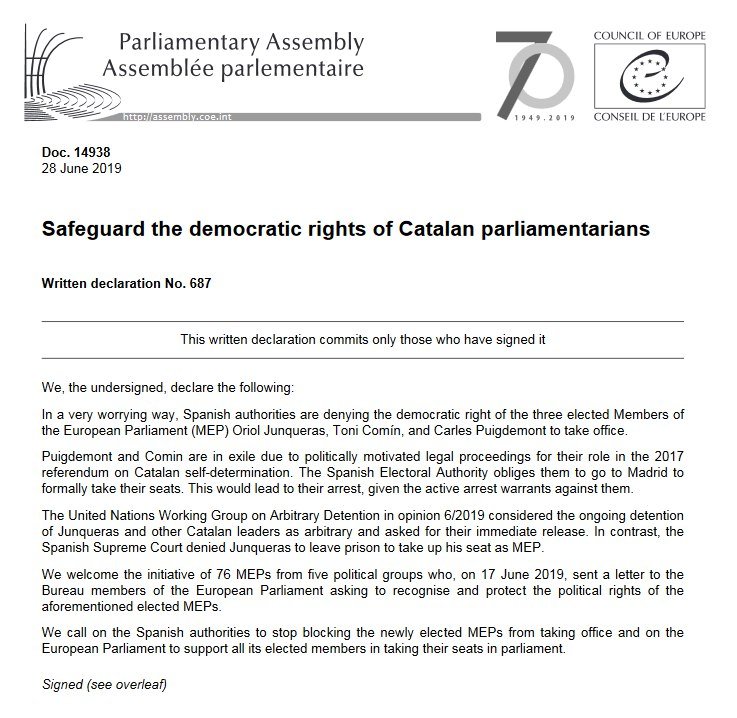 The Spanish Consul in Edinburgh has been fired after a letter was made public, in which he wrote ‘Entry into the EU does not depend at all in waiting in a queue,’ and that the club can be joined ‘if the economic and political conditions required by all the treaties that regulate it are fulfilled’. Also stating that the Spanish government position ‘has always been’ not to block Scotland’s entry into the EU ‘if independence is legally achieved’.

These statements contradict what Spain has officially been repeating as a Damocles sword over Scotland, threatening with blocking its re-entry into the EU. The Spanish opposition to a re-entry has also been repeatedly used as a deterrent for Catalonia’s own independence aspirations. This episode illustrates once again how Spain immediately acts against anyone telling the truth or stating something that contradicts Spain’s fake arguments against pro-independence views.

It doesn’t matter if it’s Catalan elected officials, civil society leaders, UN experts on Arbitrary Detentions, or even their own consuls. There’s no space for freedom of expression in Spain, if it contradicts the unionist point of view.

At this point, everyone should expect the Spanish Inquisition.

‘In fact, the reason Pujol was in Normandy 35 years ago, four years before his death, was part of the recognition the British authorities finally awarded him for his spying work as a double agent deceiving Nazi Germany about the Allies’ true intentions in 1944.

Pujol is better known by his codename “Garbo,” after the famous Hollywood starlet of the time Greta Garbo (he was “Alaric” to his German handlers), but when he first offered his spying services to British military intelligence he was turned down, three times.’

‘So successful was Garbo’s manipulation of both fake and real information that the Germans ended up financing a network of 27 fictitious agents, and even stopped recruiting spies in the UK. In fact, Pujol was awarded the Iron Cross for his “services” to the German war effort.’

‘For his effectiveness and loyalty, the British made Garbo a Member of the Order of the British Empire (MBE), and when the Allies began preparing for D-Day, which would see an invasion force of 160,000 landing in Normandy, they turned to Pujol for help.’

‘While the Germans had got wind of the plans for Operation Overlord being commemorated this week, Garbo distracted them with Operation Fortitude, a deception campaign in which the Catalan spy convinced the Nazis that the main attack would be at Pas de Calais.
Garbo got to work, sending the Germans over 500 radio messages between January 1944 and D-Day. That split the German forces and prevented them from reinforcing their defences in Normandy where the actual invasion was set to take place.’

‘After the war, Garbo avoided Nazi reprisals by faking his death and moving to Venezuela, where he ran a small business. It was only thanks to detective work done by a former British politician and writer, Rupert Allason, that the world was reacquainted with this unlikely hero.’

‘Pujol’s legend lived on and his story was told in a 2009 film called Garbo: The Spy. As the world commemorates the efforts of thousands of soldiers on Thursday, one hopes a thought will be spared for a Barcelona poultry farmer who was key in bringing down Hitler’s regime.’

The following are some examples of the assertions the Spanish Prosecutor made on his closing statement during the Trial against Catalan political prisoners:

‘Those who offered resistance are responsible for all the violence’

After reading all these statements, it’s shamefully obvious the Prosecutor not only doesn’t understand anything about civil resistance, and the Theory of Passive resistance or non-violent campaigning, he doesn’t even know that there’s a Criminal Law principle that says ‘Nullum crimen, nulla poena sine praevia lege’. This is the legality principle for which a person cannot face criminal punishment except for an act that was criminalized by law before he/she performed the act. This is a disgraceful mock of Justice and of what should be an actual Trial.